The Wokwi Logic Analyzer is a virtual instrument that helps us analyze and debug digital signals. We discussed its basic operation and how to connect it to your development board (e.g., Arduino Uno) in the previous article.

In this article, we’ll dive into how UART works by setting different configuration options and analyzing the result in the Logic Analyzer. We will:

💡
This is the second article in the Wokwi Protocol series. In the upcoming articles, we'll use the Wokwi Logic analyzer to learn about many more protocols: SPI, I2C, Servo Motor, NeoPixels (WS2812), PWM, and more.

Baud Rate: Not What You Expect

In the first part, we printed a text message using this project Logic Analyzer Demonstration playground. We'll keep using the same playground for this blog post.

When we configure UART (e.g., using Serial.begin()), we specify the baud rate. The baud rate defines how many bits we send every second.

The baud rate calculation comes in handy when we want to find the baud rate by looking at the signal. Let’s measure the bit width of the UART message in our playground project:️

In the screenshot above, the UART signal alternates between digital high and low. We highlighted two points of interest:

Next, we'll zoom in on the waveform and measure the baud rate using the cursor.

The playground project sets the baud rate to 115,200 by calling Serial.begin(115200) at the beginning of the setup() function.

Zoom in, press Shift, then click and drag from the point the signal goes high to the point it goes low to select this region:

Luckily, the tolerance of the receiving devices is usually within the 5% range, so we don't have to worry about minor deviations.

Now, we’ll set the signal’s baud rate to 9600 and then measure the actual signal baud rate on the Arduino Tx Pin:

After running the simulation again, we can download the VCD file, open it in PulseView and see the signal.

If you are using the UART Protocol Analyzer in PulseView (as we did in the first part of this blog series), don't forget to update the baud rate setting there:

By looking at UART signal with the logic analyzer, we were able to find the actual baud rate of the signal.

You can also find the expected deviation for each baud rate setting in the datasheet of your microcontroller. For the Arduino Uno, that is the ATmega328p datasheet.
The following table shows the deviations when running at 16MHz:

After looking at individual bits, let's talk about how UART transmit bytes of data.

When the line is idle, and there is no data to transmit, the signal is high. Then, when the transmitter wants to transmit a byte of data, it sends the following sequence bits (when using the standard Serial settings):

You can observe these in the screen shot below. PulseView marks the start bits (which are always low) with S, and the stop bits with T:

You can also see the eight bits of data that make each byte, and the idle signal at the beginning - it stays high until the first start bit.

But this is just the standard UART - let's take a look at how we can make it a bit more interesting...

Let's zoom in around the stop bit:

This means that the signal can stay high for longer than a single bit time. In fact, it'll stay high until a new byte is ready for transmission. The stop bit must be at least as wide as the other bits (as dictated by the baud rate), but it can stretch longer.

However, we can force the stop bit to be even longer, increasing the idle time between bytes.

Did you know that Serial.begin() also accepts a second, optional parameter following the baud rate?

Most Arduino developers don't know it, but you can specify a non standard UART configuration using the second parameter of Serial.begin(). The following table summarizes the supported configurations:

* This is the default value

We'll talk about the data bits and parity later. For now, let's see what happens if we change the serial configuration to have two stop bits instead of one.

Two Are Better Than One?

Let's see what happens if we change the UART configuration to transmit two stop bits instead of one. The default configuration is SERIAL_8N1, so we'll go with a similar configuration, changing only the number of stop bits from 1 to 2.

This gives SERIAL_8N2. Change the first line in setup() to read:

Run the simulation, stop it after a few second and load the logic analyzer VCD file into PulseView software. You'll see that there are now two stop bits instead of one (the high time of the signal is twice the length of each data bit):

The stop bit’s width is now twice that of a single bit. Neat, isn't it?

💡
The more stop bits there are, the more time the receiver has to process the data and get ready for more. This used to be super important back in the day but not really anymore. But here's the thing, if you use too many stop bits it'll slow down the whole process. So only use extra stop bits if you really need to.

Parity bit is a simple error detection mechanism — it allow the receiver to find errors in the transmitted data. The parity bit, if present, is sent right after the data bits, and before the stop bit(s).

There are three possible configurations for the parity bit:

💡
So, which parity to choose, odd or even?
Consider the data you are sending. If you see that most of the data are inclined towards even parity frame then select even parity. Else odd.

Here's an example that illustrates what the parity bits may look like given different values of the data bits, in both even and odd parity configurations:

💡
You cannot view the messages on the Arduino Serial Monitor when the parity bit is configured as even or odd. The Serial monitor will not decode the bytes correctly, and you'll see gibberish.

We'll configure UART to use an even parity bit by changing the call to Serial.begin() as follows:

Then, run the simulation and load the VCD file into PulseView. This time, when you configure the UART protocol analyzer, make sure to set the Parity option to even:

The first transmitted character is ‘W’. The data bits have total of five ones. The parity bit is high, in order to make even number of ones:

The next transmitted character is ‘e’. It has four logic ones. The parity bit is low, in order to keep the total number of logic ones even:

💡
Teletypes had an advantage when even parity was used. Some older synchronous protocols used odd parity to have more 1s in the data stream. Basically, due to historical reasons, we have both even and odd parity.

Similarly, we can configure Serial to use odd parity:

Looking at the signal PulseView (remember to configure the UART Protocol Analyzer with odd parity), we can see that now the number of ones in the first transmitted character is five, and the parity bit is 0, to keep the number of ones odd:

The next character is ‘e’. It has four logic ones, so the parity is now high to make the total number of ones odd. Exactly the opposite of what we had before:

The answer is both yes and no. If the device or machine you're working with requires it, then you have to use it. There's no getting around it 👻

But here's the thing, the parity bit is important for catching mistakes that can happen when sending data, like if there's noise or the clock on one device is somewhat inaccurate. So, in short, even though it might not always be required, it's still a good idea to use it because it helps keep your data accurate.

Nowadays, bytes are always made of 8 bits. In the past, however, the size of a byte varied between systems. Arduino's UART implementation supports such legacy systems - you can choose between 5, 6, 7 or 8 data bits per byte. Other microcontrollers, such as the STM32, even support 9 data bits.

We invite you to experiment with different data bits settings (e.g. SERIAL_7N1 for 7 bits), and observe the UART signal with the logic analyzer. You already know how to use it like a pro!

UART is a relatively simple protocol, and now you know then ins-and-outs of it, including some of the more esoteric features, such as parity bits and non-standard number of data bits.

More importantly, you've gained a new skill — you learned how to use the logic analyzers to dive into the internals of digital communication protocols and study how they work. You can also use this skill to debug communication issues.

We're planning more articles in this series, covering additional protocols, such as SPI, I2C, Neopixels, and looking into signals such as PWM and servo motor control.

If you have any feedback or suggestions to make the simulator more helpful, you can always connect with us on Discord, Facebook, and Twitter. 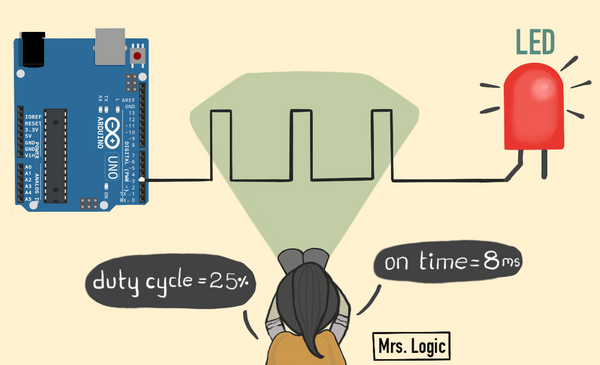 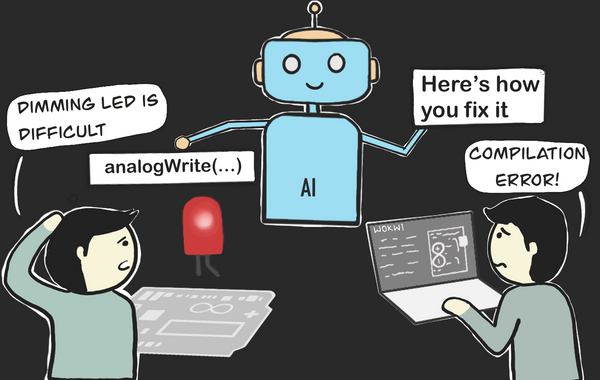 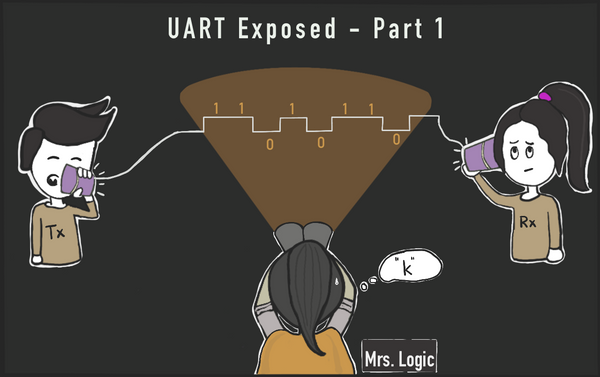 Look into the raw Tx/Rx signals using Wokwi and PulseView. No hardware required!